Kiel Johnson in Art in America

You may remember Kiel Johnson‘s mega-solo show here at MMG last year, but in case you need a refresher, Art in America just published a fabulous review by Janet Koplos in their most recent issue.

Koplos notes that Johnson’s “Publish or Perish” “highlighted the manual dexterity and conceptual wit that have earned him recognition in L.A.”

Check out the full-length review HERE!

We can’t believe it’s already March, but apparently it is and we’re getting on a plane to go to New York on Monday for art fair week!

PULSE New York is moving to a new location at 330 West Street, at the corner of the West Side Highway and West Houston Street. The new venue, a former New York Central Railroad freight train terminal housing five blocks of the original High Line, has 30-foot high ceilings with varying levels of lofted space to be used for special projects. The fifth edition of PULSE New York will take place March 4 through 7, 2010.

Mark Moore Gallery will be featuring a solo booth of new work by Canadian painter, Kim Dorland, in Booth A-16. These paintings have never been seen previously, are studio-fresh and created especially for MMG’s booth at PULSE NY. Additionally, artist Tim Bavington has been selected to create a special public installation near the entrance of the fair venue – complete with new works!

To preview the Bavington and Dorland works going to PULSE, visit our art fair preview page. Additionally, you can keep abreast of all the fair activity by reading our Fair Reports here, or following our updates on Twitter and Facebook.

Planning on heading to the fairs, or being in the New York area? Send us a message on Facebook or @-reply us on Twitter, and we’ll send you day passes!

The exhibition, curated by Grace Kook-Anderson, “is a survey of contemporary art and culture in the OC featuring some of the most provocative painting, drawing, sculpture, photography, multi-media installation, video, architecture, performance, music, and design that Orange County has to offer.”

As we’re preparing for the upcoming New York fairs, we’ve fallen a tad behind on posting Will Tee Yang’s lovely photos from Kim Rugg and Josh Azzarella‘s opening on February 13th. While you’ve most likely seen them on our Facebook Fan Page (*cough, cough*), we always like to post them here as well for your viewing pleasure.

Be sure to come out to the next opening on March 20th, from 5-7pm, for Kim Dorland! More info to come soon…

Ryan Taber will be the first artist featured in the Torrance Art Museum’s “Sunrise Series,” an annual solo exhibition featuring a unique emerging artist from the SoCal area (though international artists may be included on occasion).

Taking over the main gallery of the museum, Ryan has created a new body of work specifically for the museum, which will serve as his second museum solo exhibition.

Surely not to be missed, the opening reception will take place Saturday, March 6, from 6-9pm. The exhibition will be on view from March 6 – April 17, 2010.

As of tonight, Josh Azzarella officially has two solo exhibitions open at the same time: his first LA solo show here at MMG (which opened last Saturday, on view through March 13, 2010), and his third solo gig at DCKT Contemporary in New York.

On view through March 21, 2010, DCKT is featuring an exhibition of Josh’s newest photographs, which range in images derived from cinema, journalism and amateur photography.

For more information about this exhibition, or DCKT, visit the gallery website.

For now, read this preview of Josh’s work on Flavorpill, but make sure you ink (no pencil!) in the opening reception next Saturday, from 5-7pm, featuring event coverage by Will Tee Yang and a set by DJ MoreDillon.

With his first LA solo show coming up at Mark Moore Gallery (opening February 13, 2010), Azzarella delves into some of the more pressing questions surrounding his latest artistic feat. Read the interview in its entirety here, and don’t forget to come see it for yourself in two weeks here!

Jeremy Fish is a busy man. Between the mobile art tour, recently launched jewelry line and his first solo exhibition at Laguna Art Museum, it’s likely that people may want to know his thoughts on the art world at large.

Luckily, Upper Playground caught Fish long enough to snag a few words for YouTube. Check out Jeremy’s opinions on art and t-shirts, and the limited difference between the two. Click here to watch! 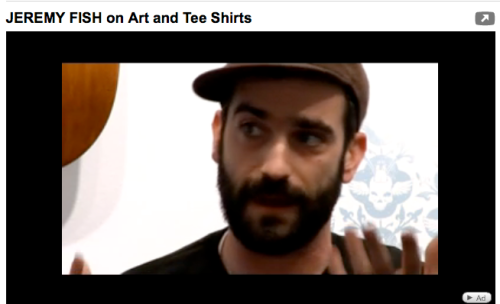